Bam-Bam is going to a bunch of “turning 5” birthday parties this month.  With these parties comes the need for constant present shopping.

I always handle the present shopping, and try to hide the gifts until the day of the party, so that he doesn’t think the gift is for him.

On the day of the party, I pull the present out so Bam Bam can do his cute chicken scratch name on the card.  Before he writes on the card, he always asks to see the gift.

Why is it that whatever I choose to buy for his friends, just happens to be the one toy his friends most definitely would not want? (in Bam Bam’s eyes) 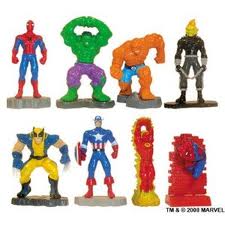 A few months ago, we purchased little superhero figurines for a friend.  Bam-Bam spent quite a bit of time trying to convince us that Luke absolutely can’t stand superheroes, and that we definitely should not give them to him.  He told us that Luke would throw them away and be upset at the very site of this present.

When I said, “ok, then I’ll have to take them back”, he threw a fit exclaiming that he needed them for his room so that they could fight his larger superhero figures.

Well, we wound up giving the figures to his friend, Luke, but I also acquiesced and purchased the figures for Bam-Bam a few weeks later.

I did make him clean his room and eat veggies though to earn his superheroes.  B+ for parenting on this one.

Today, he had another birthday party to go to for his friend, Jake.

Same scenario as above.  I purchase the gift, hide it, bring it out on party day for signature.  This time, the toy in question is a spiderman ball.

Apparently, in Bam-Bam’s head, Jake does not like Spiderman at all and would really not like this gift.  Big surprise.

He proceeded to play with the ball with his 8 year old sister, Imagineer.

Luckily, when I explained that we were most definitely giving the ball to Jake, the scene was not nearly as large as with the superheroes.

I guess, the superhero figures are a golden nugget compared to a spiderman ball in the eyes of a discerning four year old.

Dinosaurs and Spaceships
Giving our Kids Space to Grow
Legos are the Bomb!