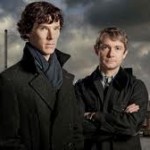 It is usually about 9pm by the time Mountain Man and I have successfully tucked in all three little ones and finally have some peace and quiet to ourselves.  We enjoy using our DVR to record our favorite shows and then watch them for an hour or so at night.

Because our time is so precious, we only watch the BEST (in our opinion) that TV has to offer.  Luckily, we have found a handful of shows that truly amaze us with their wit, high quality writing, and well developed characters.

Sherlock is one of these high quality shows and you simply must try to see this show even if you only like detective shows a little bit- you will enjoy this one a lot.

Sherlock is the latest brilliant creation at the Masterpiece Theater on PBS.  It is a modern day Sherlock Holmes story with amazing actors and incredibly well written story lines.

Benedict Cumberbatch and Martin Freeman are the stars, playing Sherlock and John Watson respectively.  Their performances are seriously riveting and I now want to see all TV shows and movies these actors have done in their careers.

I love shows that keep you guessing until the very end.  With this show, even at the very end, when you think you have the answer, you don’t.  There’s always a little, or I should say BIG surprise that you probably had not considered as a viable option.

Mountain Man and I watched the final episode of Season 2 last night and the first thing I said afterwards was “How mean of them to make us wait almost a whole year to see what happens next”.  With the way they ended this episode, there are so many ways that this show could go.  I guess that’s a really fun scenario for the writers as the options are wide open.  Whatever they decide, if the first two seasons are any indication, the story will only get more complex and mystifying.  I love it!

It is a bit frustrating that their “seasons” are only three episodes!!  Pretty crazy.  It would be nice if they’d consider at least adding a few more episodes to their seasons.

Martin Freeman, who plays John Watson, is starring in “The Hobbit” that comes out this Christmas.  Mr. Geek is a huge fan of Lord of the Rings, and is eagerly anticipating the release of this movie.

Tidbits from Interview with Benedict Cumberbatch

The Guardian did a fun interview with Cumberbatch in January of this year.

I learned that we share the same dislikes about ourselves.  When asked what is the trait he most deplores in himself, he said “impatience and indecision”.  These are two traits I’m trying to improve as well.  Good to know someone else has the same problem.

When asked what his most embarrassing moment was, he replies, “When I was six, I got stung by a wasp in a Greek market. A widow pulled down my pants, held me upside down and rubbed an onion on my bum.”  I am still cracking up from this response.  Its so great to have a good afternoon chuckle.  🙂

Has anyone watched Sherlock yet?  What do you think?

Messy Morning
Its Ok to Have Snowflakes in your Living Room
Wordless Wednesday: I Need to Learn how to Draw
Will Ferrell is my Favorite Comedian
The Avengers Movie Is Very Well Done
Worrying is not Worth It

Mom's Monday Mingle
Daily Smile
Worrying is not Worth It