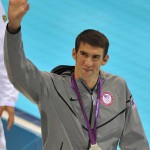 Michael Phelps, the Most Decorated Olympian

I am finally getting caught up on the Olympic action.  Swimming is by far my favorite sport to watch, and tonight I was able to sit down and watch the 4 x 200 free relay that propelled Michael Phelps into Olympic history.

This win and gold medal brought his total medal count to 19 for the four Olympics that he has participated in for the past 12 years.  Incredible.

It was really exciting that the 19th medal occurred from a relay race, so the other three members of the relay could participate in this historic event.

Where did he win all of his medals?

Phelps has participated in four Olympic Games including Sydney 2000, Athens 2004, Beijing 2008 and London 2012.  The medals were all earned in the following races:

The enormity of this accomplishment really smacks you in the face when you see a complete list of all the events where Phelps finished with an Olympic medal over the last 12 years.

Back in the Water Finally!!
Hanalei Diaries: Day 5
Hanalei Diaries: On my way to Hanalei
USA Olympic Swim Team Performs "Call Me Maybe"
States, Capitals and Flags, Oh My!
Did you ever Collect Something?