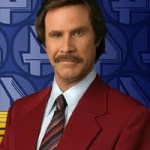 A post I read today at Look Who Found the Marbles mentioned Will Ferrell as a participant in a recent event called “Soccer Aid 2012” which raised 6.8 million for Unicef.  I just love reading about when one of my favorite celebrities is also involved in very worthwhile causes.  It just warms my heart and makes me even more endeared to them.

Will Ferrell happens to be my favorite comedian.  He is one of those guys that I just have to look at, and I’m cracking up.  I would probably put Steve Martin and Martin Short in that category as well.  If anyone here has seen the movie “three amigos”, you’ll understand why I can’t think about Steve and Martin without falling into a fit of giggles.  They are just brilliant.

But, I have to say, Will Ferrell is still my favorite.  When I saw him in “Elf” back in the early 2000s in the movie theater, little did I know that this movie would become one of my future family’s favorite all time movies.  We watch that film a handful of times every Christmas and another handful of times throughout the year.

I do not think anyone could have pulled off the roll of “Buddy the Elf” quite like Will Ferrell did.  There are so many one liners that my family repeats all the time.  Like when Mary Steenburgen asks Buddy “Do you like syrup?”  Buddy responds with, “Does syrup have sugar in it?”  Mary says, “Yes”, and Buddy says “Then yes”.  If you’re not familiar with this scene, it will probably not be all that funny, but if you’ve seen the way Will Ferrell delivers his lines, with such convincing innocence and childlike excitement, you would be rolling as well.  This is just one scene, but there are many others.

My other favorite Will Ferrell movies would have to include: Anchorman, Step Brothers and Talladega Nights.  I remember when Mountain Man and I went out to the theater to see Talladega Nights, he was laughing so hard, I thought he had stopped breathing for a moment.  He could not sit in his chair, he was curled over laughing so hard.  I’m not kidding.

Remembering funny parts of some of Will Ferrell’s movies have helped me get past some anxious times in my life as well.  Like before my first Alcatraz Swim.  I decided in 2006 to jump off a boat in the San Francisco Bay and swim from Alcatraz Rock to San Francisco.  I was exceedingly nervous during the walk to the boat.  My friend doing the swim with me started spouting off scenes from Anchorman, and all I could do was laugh, forgetting completely about my nerves.

Interesting Factoids about Will Ferrell

And the rest is history…..

I love reading biographies of all types of people.  I find them so inspiring.  Everyone has to start somewhere, whether it be performing as a mall Santa or selling hotdogs at a park.  There is a starting point for everyone.  If you follow your passion, you will truly live the life you most desire.

Will Ferrell is an inspiration.

My Strange Dream
How to Create Your Own Social Media Buttons
Finally, Back in the Water

Pinterest
0
« Havanese Dogs are the Greatest
My Strange Dream »