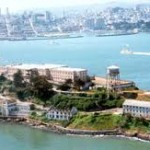 Alcatraz with San Francisco in background

Sometimes, as a Mom, I believe its a good idea to get out of your comfort zone and do something a little crazy.

Something that will challenge and inspire you.

My Alcatraz swim fits into this crazy category, and I remember it with fond memories.

The Swim from Alcatraz

Icy cold waters, high waves, and high winds are typically what come to mind when you think of swimming in the San Francisco Bay.

Even with these conditions, thousands of people every year brave the treacherous cold to complete the Alcatraz crossing, a 1.5 mile swim from Alcatraz to the city.

I understand the allure of this swim, and here is my story……..

In 2004, I watched my brother get on a boat at Pier 42 in San Francisco and head on out to Alcatraz Island.  When the boat reached Alcatraz, all 200 of the swimmers on the boat jumped into the cold waters of the San Francisco Bay to begin their 1.5 mile swim back to the city.

I decided to be a spectator on the boat ride and was able to stand on the top deck, so I had a first hand view of the event.

At the time, I thought my brother and all of the other swimmers were insane.  I could not stop laughing when my brother jumped off the boat and said “wow,that’s cold”.  I was truly awestruck that such a race even existed, much less drew this much interest.

My shock did not last long though, because the following year, I decided to attempt my first Alcatraz crossing.

My First Swim From Alcatraz

I signed up to compete in the “Swim with the Centurions” race hosted by Pedro Ordenes and the Water World Swim Club.  The event took place in July and I was extremely uneasy about my decision to do this swim.

The beneficial part for me about signing up for an event is that it causes me to be very consistent with my swim workouts.  This consistency is created out of a desire to make sure I do not look foolish or completely out of shape.  🙂

On race morning, I arrived at the bleachers in front of Ghiradelli Square at 6:30am in Aquatic Park to check in, put my wetsuit on, and mentally prepared for my race.

Yes, I chose to be in the wetsuit group as opposed to the “skinny dippers”.  If you chose to not wear a wetsuit (only a swimsuit), you were referred to as a “skinny dipper”, which I thought was very amusing.

It is necessary to have two race divisions, because with a wetsuit, you should swim faster than without one.  Its incredible how the wetsuit gives you much more buoyancy and such a super sleek feel in the water (its like wearing dolphin skin).

This was my first experience with a wetsuit.  After the initial 14 tries or so of trying to put my suit on in the store, I finally got the hang of it!  The suit really does make swimming in cold waters so much more bearable.

The March to Pier 42 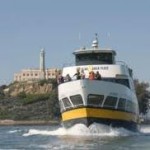 The boat for the swimmers to get out to Alcatraz takes off from Pier 42, which is about a 3/4 mile walk from the bleachers at Aquatic Park.  To make the beginning of this walk momentous and to kick off the craziness with style, the race coordinators hired several Scottish bagpipe players.

When the bagpipes started, the butterflies started for me.  I was distracted by all of the silliness going on around me.  There was a man dressed up as a shark as well as people in their bathrobes and slippers making their way to the boat.

We were literally walking through the streets of San Francisco at 7am in the morning on a Sunday, being led by bagpipers.  Really, really fun stuff.  🙂

We Arrive at the Boat

Finally, the walk that seemed to go on forever ended at Pier 42, where we were greeted by a large boat that was the size of the Blue and Gold Fleet tour boats that you see frequently in the San Francisco Bay.

I climbed aboard and started to obsessively adjust my cap and goggles.  I really did not want my goggles to fall off when I dove from the boat.  Its ok to lose your goggles in a pool, but not in the murky San Francisco Bay.  I also wore two swim caps, just in case one fell off from the persistent waves.  The waves were a medium size that day, so I guess it could have been worse.

The Jump off the Boat at the Alcatraz Rock

The ride was about 10 minutes at the most.  It could have been shorter – my memory is

probably clouded by the extreme terror I was feeling at that particular moment.  Over the few weeks leading up to the event, I had gotten myself worked up over the threat of sharks lurking in the Bay.

I had been assured, though, by many individuals that the only sharks in that region of the bay were sand sharks that swam very close to the bottom of the bay and nowhere near the swimmers.  Great, that calms my fears.  NOT.

I had done my research and found out that the sharks humans should really be worried about are great white sharks.  The great whites are interested in humans if they catch them encroaching on their territory, but most other types of sharks are not interested in messing with us.  PHEW…

So, I had mostly gotten over this fear, but then that silly swimmer had to dress up in a shark costume to walk to the boat.  I have to admit, it did make me laugh.  His face was showing through the sharks teeth lined mouth.  Really, really funny.  🙂

Anyway, I digress.  So, we arrive at the rock, and the coordinators tell the swimmers to get in line.  They proceed to let three people jump off the boat at a time.  Everyone has a time piece strapped to their ankles to determine accurate individual times.

When I was a few groups behind the group jumping, I thought I was going to vomit, I was so worked up.  I started to worry that if I didn’t swim fast enough after making the eight foot jump from the boat, that I would be sucked under the boat by the fast moving propellers.

Its really amazing what your mind can conjure up when you are irrationally worked up over something.  😉

So, I made the jump, my goggles stayed on, and I started swimming as fast as I possibly could to get away from the boat.

The race coordinators told us to focus on a large condo building behind ghiradelli square.  By aiming for that particular building, it would help us to swim in a straighter line, as opposed to zig zagging all over the place.  The focal point for the swim will differ depending on what the current is doing on race day.  Focusing on that building really helped me!  I wound up lifting my head about every 20 strokes, so I could look straight ahead and make sure I was still on course.

If you veered too much off course, the race organizers surrounded the swimmers in the race with kayakers, who would tell you that you were veering too much right or too much left.  Knowing they were there gave me a much needed reassurance, but I actually never encountered a kayaker, so good for me.  🙂

Even though there were about 400 swimmers that day, I felt alone in the vast waters of the San Francisco bay.  It was really quite amazing how quickly everyone dispersed and went on their own way.

Nearing the end of the race 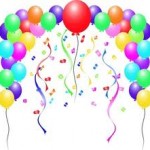 Aquatic Park is surrounded by solid piers that help to keep the waters calm inside the park.  When you get to the point where you are swimming through the opening between the two piers, you know you are almost there!!!  You can finally see the balloons waiting for you at the finish line and the people cheering.

Even though you are almost there, it is still 400 yards to the finish line, and it did seem to take forever, but I made it!  When I stood up, my legs were so wobbly, I could barely run across the finish line.  I think the temperature of the water and the constant waves the you endure for the entire swim throws off your equilibrium.

The swim took me 40 minutes.  Since I did not have another swim to compare this time to, I was very proud of myself.  After the swim, you get to enjoy fresh San Francisco clam chowder and hot tea and coffee right next to the bay.

I Liked it So Much, I Did the Swim Again

Yes, that’s right.  After all the build up, anxiety, and drama I put myself through the first time, I actually wanted to sign up for the swim the next year, and I did!

This time, the waters were much calmer, and I was much calmer.  I dropped my time to 33 minutes.  I could see how the water conditions really make all the difference in how long your crossing will be that day.

I’m thankful that I started my Alcatraz crossings with a wavy course, and not the calm one.

Although, after experiencing both now, I’m hoping for a calm course next time a I sign up.  I’m hoping to sign up for a swim this year.  There are many clubs that put on these events.  I think I might be ready by September.  Also, it will give me a reason to show up to swim workout three times per week.

There is an Alcatraz 100 Club where you can join and swim with swimmers who have completed the Alcatraz crossing at least 100 times.  They are part of the “centurion club”.  Maybe I’ll go for it.  I’ll keep you posted.

If you love swimming and want to swim the course that prisoners attempted many years ago from the infamous Alcatraz rock, sign up for this swim.  You will be glad you did.  🙂

My Napa Getaway
My roller skating debacle
Heartbroken and Perspective

Hotel Transylvania
Havanese Dogs are the Greatest
Hanalei Diaries: Day 6
Did you ever Collect Something?
I want to punch someone
Easy DIY Halloween Home Decor