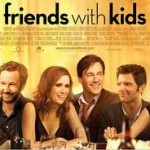 Finally, a movie that does not star Will Ferrell that made me laugh so hard I practically fell out of my chair!

This movie caught me by surprise, because I was not expecting anything.  A few weeks ago, it was raining heavily and my Mom was taking me out to lunch for my birthday.  Afterwards, she mentioned that her favorite movie reviewer on her local radio station was raving about “Friends with Kids”.  Since it was raining and we were close to a movie theater, we purchased matinee tickets.

I went in expecting nothing, because I had not heard anyone talking about this supposedly fantastic movie.  The low expectations might have contributed to my high praise of this movie, but I think it is much more than that.  I can tell you that from two minutes into the movie, I was laughing and I really do not think that three minutes went by in the rest of the movie where I was not cracking up along with the rest of the theater.

The movie begins with a group of six friends (two couples and two singles) having dinner at a fancy New York restaurant.  These six friends have been good friends for at least a decade with several of them having known each other since high school.

There are some kids crying at the table next to them and they all roll their eyes at the parents for bringing their young kids to such a nice restaurant.  Within seconds, Maya Rudolph and Chris O’Dowd announce that they are having a baby, and the hilarity begins.

Four years after the dinner

After Maya and Chris announce their impending parenthood, the movie cuts to four years down the road where the main characters played by Jennifer Westfeldt (Jules) and Adam Scott (Jason) are visiting Maya and Chris’ family in Brooklyn to celebrate Jason’s birthday.

When Maya answers the door in complete disarray with screaming kids behind her, the complete hilarity of this scene begins and symbolizes how things have changed in a BIG way from four years earlier.

Anyone who has had kids in the past decade, especially, will be cracking up at this scene just due to the fact that a lot of the events hit a bit too close to home.  🙂

Jon Hamm (who I love from Mad Men) and Kristen Wiig play a couple who have a two year old at this point and are not happy.

In a nutshell, Maya and Chris play the solid couple, Jon and Kristen play the unstable, unhappy couple and Adam and Jennifer play the best friends who realize they might actually really love each other.

Adam and Jennifer after much hilarious discussion, decide to have a child together and maintain a 50%/50% custody arrangement.  As you can imagine, it does not play out as nip and tidy as they had planned when they devised this plan.

So many subtle moments

This is one of those movies that you go home afterwards and keep thinking of all of the individual moments throughout the movie that made you laugh very, very hard.

One of the moments that comes to mind is when Maya Rudolph pushes Jennifer Westfeldt into Ed Burns at a parent night at her kid’s school.  Ed Burns is recently divorced and a great catch, so being the good friend that Maya is, she literally shoves Jennifer into Ed and pretends to have “lost her footing”.  Really hilarious and something many of us would do for our good friends.

There are also serious moments filled with reflection and “aha” moments that help to make this movie a well rounded piece.

Ten minutes into seeing this movie, I was already thinking that I just had to see this movie with my husband.  I was also thinking what a fun movie it would be for a girls night out with other Moms.

So, the following week, I organized a group of 5 Moms to go see this movie and everyone was in hysterics.  One of my friends had a kleenex in both hands, wiping tears from her eyes most of the movie from laughing too hard.  Yes, it is that good.

It was also funny to see the audience that arrived that night.  It was other groups of Moms and Moms with their daughters.  So, I could see that people were finding out about the movie, but I still don’t think enough people know about it, which is why I really felt the need to share on my blog.

Then, two days later, I took my husband, who found it equally as funny, but in typical guy mode, thought the ending was unrealistic.  Who cares?  Its a feel good movie and I always want the perfect ending, so I was happy. 🙂

Pinterest
0
« Our Disneyland Trip 2012
Mrs. Meyers – Aromatherapy for your house »