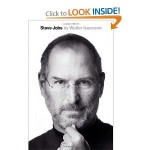 These are the first words that come to mind when I think about Steve Jobs.

As you might have gathered, I just finished the Steve Jobs Biography, by Walter Isaacson, this afternoon.  Wow, what an incredible book and an extraordinary life.

There are so many fascinating insights, struggles, complications, and triumphs covered in this book.

I was completely captivated the whole time, and this is a 600+ page book, so thats saying something.

Isaacson’s writing style is wonderful, and really makes you feel like you’re taking a stroll through Jobs’ life, and in some parts, like you are in the same room as Jobs listening to him reflect on his life.

I really enjoyed how Isaacson lists the cast of characters in Jobs’ life at the beginning of the book. Issacson gives a little snippet on each person that had meaning in Jobs’ life to set the stage for what is to come in the story.

It made me consider how all of our lives are made up of characters (our friends, family, work colleagues etc…) that all play a role in the story of our lives.  These characters each help to mold our lives in different ways.

Its fun to think of my life as a story and to look at each person in my life as a contributor to my personal growth.  This is probably a very healthy way to approach life and gain as much as I can from my interactions with others (ie: instead of being frustrated with someone, think “opportunity for growth”  🙂  ).

This book is so chock full of the details surrounding the history of the personal computer, and the personal life of Steve Jobs, it is difficult to capture it all in one post.

I thought I would outline my main takeaways from this book and list a few tidbits about Jobs that you probably did not know.

My Takeaways from this book about Steve Jobs, Apple, and Leadership

Steve Jobs was an exceptional person with a complicated personality.  His drive and passion for Apple products are responsible for creating the world’s first personal computer.

His relentless pursuit of perfection became his defining quality.  The lengths he would go to in order to ensure that the different Apple products were the best of the best were extraordinary.

Yes, he threw tantrums.  Yes, he belittled people in public.  Yes, he worked his team to the bone.  Yes, he might have been quick to say an idea was bad (he used more colorful language than “bad”) before hearing a developer out, and then turn around and implement that “bad” idea. Yes, he might have used charisma to get his way.

But, through it all, no one had his passion.  Without his passion, Apple would not have become a reality.

I believe the world is a much better place with a company like Apple to look to for guidance.  Jobs believed that companies should focus on a few very high quality products, rather than push out many average products.

If all companies maintained their focus on the development of the product to best serve their end user, the world would be a much better place and filled with significantly less junk and clutter.

Jobs believed that meetings should be filled with sharing ideas and communicating face to face, rather than hiding behind a powerpoint presentation that had been memorized.  He truly enjoyed the exchange of ideas focused on developing quality products, but wanted the ideas to come from the heart, rather than a prepared presentation.

Towards the end of the book, Isaacson discusses how Jobs has his son, Reed, join him in a three day meeting with senior management and publicity experts to deal with an Ipad problem.

Jobs talks about how those meetings that Reed witnessed were some of his most effective meetings ever, and how he is so glad that Reed was able to be a part of them.  This took place in the last few years of his life.

When you walk into an Apple store, Jobs’ belief in minimalism and perfection is so evident.  Jobs’ hope was to create a maximum statement through minimalist techniques with the stores.

In the book, Isaacson discusses the unbelievable detail Jobs put into the design of the Apple stores.  When he presented the idea to the Board of Apple for retail stores where customers could touch and feel the products, no one was in favor.  They pointed to the failure of the Gateway retail stores.

But, Jobs was not one to take the answer no very well, and was able to convince them to set up some retail stores.  Well, as we all know, that was a multi million dollar idea.  So, even when something had been tried before, that really doesn’t count, because Jobs had so much more creativity and drive than most people, that whatever he touched would most likely become incredibly effective and the best anyone has ever seen.

Because his passion ran so deep, he had to make many sacrifices along the way, but I think when you have his level of drive, it is difficult to hold back and temper that drive and passion.  If he did, he wouldn’t be completely fulfilled.

I wonder, if Paul Jobs had not introduced Steve to electronics, if his passion would have been focused elsewhere.  I believe I speak for millions when I say, thank goodness his passion was for computers and developing A+ companies.

I can say, as an avid user of all Apple products, with my iphone, macbook pro, ipod, and ipad, I wholeheartedly want to thank him for being the incredible, second to none visionary that he was for 35+ years.  He will be missed.

I highly recommend this book.  It is incredible to read about the world changing development of the personal computer and the man behind this phenomenon.

Isaacson had personal access to Steve for several years and learned much about his life on walks around Silicon Valley.  Because of his close relationship with Steve as his biographer, he really captures an intimate look into the life of this revolutionary figure.

"A Dog's Life", by Ann Martin
"The Witchy Worries of Abbie Adams", by Rhonda Hayter
"Zen in the Art of Writing", by Ray Bradbury