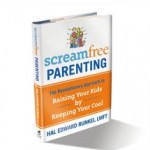 Recently, a friend of mine highly recommended the book, “ScreamFree Parenting”, by Hal Edward Runkel. The tagline is “Raising Your Kids by Keeping Your Cool”, which perfectly describes what you will learn from this very insightful book.

I made the assumption that this would be another book with more rehashed parenting ideas, but was pleasantly surprised to find out that it is full of fresh tips on keeping the calm between you and your kids.

Parents Need to Grow Up

Runkel focuses on the parent “growing up” and not being so reactive to their kid’s behavior.  One of my favorite examples in the book is about a Mom with her 12 year old daughter.  The daughter is being very dramatic and emotional about some of her Mother’s rules.

Instead of yelling at her daughter in reaction to her unpleasant behavior, she says that she remembers what it was like to be a 12 year old and that it was hard to not get worked up over simple situations.  Basically, the Mom was indicating that she understands what she’s going through, but she was not going to change her mind.  The Mom never raised her voice during the exchange.

As soon as you open your mouth with a calm tone and offer some understanding, while still remaining firm, your child will have more respect for you, and the situation will be under control much quicker.

The All Important Tone of your Voice

When I was working in Investment Management 10 years ago, I remember having the tone of your voice discussion with my co-workers and Director.  The truth of the matter is that 90% of your message comes from your tone, not the actual words that you use when your communicate.  With our clients, it was important to remain calm and steady when discussing their portfolios and answering questions.

I think this is so important to keep in mind with our kids as well.  If we are screaming at our kids and losing our cool several times a week with them, we have stooped to the maturity level of a kid.  There is no reason to lose our patience by yelling.

We will be much more effective if we stay calm and firm in our interactions.

Welcome Consequences into your Home

Another example I really enjoyed was with a teenage daughter and her Mom.  The Mom had been trying to get her daughter to walk to school for the whole year.  She would walk from time to time, but it was always a struggle to get her daughter to get ready in time and start her walk to school.  She would delay and delay until her Mom was leaving for work and could drive her door to door to school.

One morning, the Mom was failing again in her attempt to have her daughter walk to school, so she decided to introduce a time frame to this daily event.  She said that she was leaving for work in 10 minutes and if she wasn’t ready by then, she would have to walk to school and risk being late.

Ten minutes went by, and her daughter was still not ready for school, so the Mother left for work.  At lunchtime, the daughter called the Mom at work to ask her what they had for lunch at home.  The daughter had not gone into school at all that morning!  Instead of the Mom blowing up, she calmly told her daughter to get to school and accept an unexcused absence because she was not going to write a note for her.

It turns out that if you have an unexcused absence at her school, you are not allowed to attend school events for that week.  It just so happened that the Homecoming Dance was that week and the daughter had been looking forward to this event for months.  This was a huge consequence that the daughter and Mother would have to endure to drive a point home.

Do you think the daughter will ever risk being late to school again and being handed an unexcused absence?  I don’t think so.

I think this point of enforcing tough consequences is so difficult to implement.  There have been a number of times where Mountain Man and I have needed to take back privileges from our kids due to bad behavior, but I will give in because there’s a special event during the punishment time.

This book serves as a wonderful reminder that following through with a consequence serves both parties better in the long run.

We want to raise self directed adults

In the first half of the book, I became very teary eyed reading Runkel’s outline of the attributes of a self directed adult.  I became so emotional rather quickly because this list represents exactly what I hope for my kids as they grow into adults.

Runkel points out that one of the most important traits we can teach our kids is to take responsibility for their actions.  This responsibility is one of his main tenets for becoming a self directed adult and becoming an incredible example for those around them.

I love Runkel’s eight characteristics of a “self-directed” adult so much, I just have to share them with you below:

I could not have listed a better group of traits to represent what I want for my kid’s to embody.  Just imagine if the majority of the people in this world embodied these traits…it would be incredible.

I absolutely adore “ScreamFree Parenting”, by Hal Edward Runkel, and think you will too.