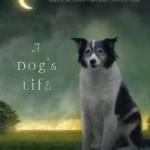 My 8 year old daughter, Imagineer, came home from school talking about a book she just finished called “A Dog’s Life”.

She loved the story and asked me to look up Ann Martin to see if she has written any other books.

I just thought that was so cute.

I love it when she is so sad that a book has ended that she genuinely misses the characters and the stories, and wants to hear more about their lives.

Imagineer thinks that Martin should write more books to follow up on this one.  She thinks that many readers would be interested in following more adventures in Squirrel’s life.

I sat down with Imagineer and asked her a few questions about the book:

A. The story is about a dog named Squirrel.  She had a brother named Bone, but when they were younger they were thrown out of a car.  Her brother was picked up and taken away.  Her other companion, Moon, was killed in a car crash.  But soon, she starts wandering around farms in the summer and winter and finds another companion named Susan, who is a human.  Susan takes her to the store and everywhere, and Squirrel ends up living with Susan.

A.  Squirrel is a white puppy with blackish spots, greyish spots, not actually that much white, more black.  She is not really a home dog until she gets older.

A. Um, I really like every scene because they are all really adventurous and about how she lives.  So now if I see a stray dog, I can think, oh yeah, that dog is like Squirrel’s life.

A. I would recommend this book to my friends because it is adventurous and if you wanted to know what a stray dog might be like, you could think about Squirrel.  This is a very adventurous and exciting book, you never know what is going to happen next.  Also, it tells about all of her life, from when she was born to when she was older.  It tells about all of the people she has seen, places she has been, and all of the animal friends.  Its very exciting, but also sad, like when she gets taken away and thrown out of the car and stuff.

That is why I would recommend this book to my friends.

For another review by Imagineer, check out Sideways Stories from Wayside School.

NurtureShock is an Eye Opener
"City of the Beasts", by Isabel Allende
"An Offer You Can't Refuse", by Jill Mansell

The Accidental Tourist, by Anne Tyler
"Hope's Crossing", by Joan Elizabeth Goodman
Paying Piper, by Ilana Waters
SuperFudge, by Judy Blume
"The Girl Who Could Fly", By Victoria Forester
The Martian Chronicles, by Ray Bradbury

"The Penderwicks", by Jeanne Birdsall
"Zen in the Art of Writing", by Ray Bradbury
Double Fudge, By Judy Blume

Seatbelt Bags - Could I finally have found the perfect handbag?
Overheard this Week
The Best Swim Goggles Ever