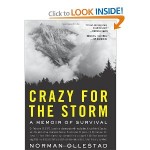 Crazy for the Storm

I just finished a riveting book tonight, called “Crazy for the Storm”, by Norman Ollestad.  This book is the definition of a “page turner“.

A few weeks ago, I was at a swim meet, and one of the Dads sitting in our area had just finished this book on his kindle.  He remarked about what an amazing book he had just finished, so, of course, I had to ask.  I already had a list going for my summer reading list, but am always willing to add another great story to the list.

I’m so glad I added this one.

The book is Ollestad’s memoir of the plane crash that he endured when he was eleven years old.

There were five people on the plane, including his Dad and his Dad’s girlfriend, flying from the Santa Monica Airport to the Big Bear Airport in the San Bernardino Mountains.  Ollestad was the sole survivor.

Normally with survival stories, they will only discuss the disaster and survival story, but this one also chronicles the author’s life with his Dad growing up.  The stories mainly focuses on the year between 10-11 (the year before the crash).

Raised By a Thrill Seeking Father

The chapters switch between the plane crash and stories about what it was like to be raised by his daredevil Dad.

Ollestad’s Dad was always searching for the biggest wave to surf or the steepest slope on the stormiest day to ski.  He brought Norman (little Norman as he’s referred to in the book) on some of his crazy adventures.

The adventures include a trip down to Mexico to surf the biggest waves, and a trip to some of the tallest mountains in Utah for skiing during blizzard like conditions.

Ollestad’s father taught him that you are truly alive when you are in a moment where your life is hanging in the balance.  This could include surfing eight foot waves or tackling black diamond ski runs at the age of four.

It is heart wrenching to read about what Ollestad endured to get himself to safety after the crash.  The story is so beautifully written, you really feel as if you are on the mountain after the crash with him.

Its amazing how vivid the memories are for Ollestad after all of these years.  The crash occurred in February, 1979, and the book was published in 2007.

After the story is told, Ollestad discusses visiting the site of the plane crash 27 years later in the epilogue.

The epilogue is so powerful in itself as you witness Ollestad finally gaining come closure from the event.  He actually travels up the mountain to where the plane crash took place and finds a piece of the plane still there on the mountain side.

Making Sense of it All

As the book winds back and forth from his life with his father to the crash, I felt like I was on Ollestad’s journey with him trying to figure out what made his Dad tick, how this affected his childhood years, and how it would ultimately affect his parenting choices as well.

The journey is a profound one, and, in the end, Ollestad recognizes that without the thrill seeking trips that his father took him on at such a young age, he might not have survived the crash. Ollestad gained many survival skills from these trips and was able to utilize those skills to get himself off the mountain to safety.

Ollestad now has a son of his own and discusses a heartwarming skiing trip where he comes to understand why is father pushed him hard on the slopes and other areas of his life.  His father believed that the rewards of pushing the limits outweighed the risks, and allowed him to remain above all of the nonsense of “normal” life.

Surfing has been on my bucket list for some time now.

With all of the talk in this book about the waves at Topanga Beach, being inside the tube of a wave, and riding it to the beach, I decided I need to move this up higher on the bucket list and take action sooner rather than later.

You know those books that you just want to discuss with someone immediately…..this is one those books.  Enjoy!

SuperFudge, by Judy Blume
"The Secret of Platform 13", by Eva Ibbotson
"Little Lady, Big Apple", by Hester Browne
What Alice Forgot, By Liane Moriarty
I want a Purple Crayon like Harold's!
"The Witchy Worries of Abbie Adams", by Rhonda Hayter

"The Secret of Platform 13", by Eva Ibbotson
I want a Purple Crayon like Harold's!
My Summer 2012 "To Do" List