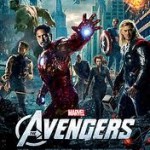 So, Mountain Man and I really needed a date night, and were trying to decide between a long leisurely dinner or a quick dinner and a movie.  We went with the movie, since we still had not seen the Avengers.

Mountain Man is a huge superhero movie fan, so it was a little surprising that we had not seen this movie since it had been out for a few weeks.

This is basically a superheroes fight the bad guys to restore peace on Earth type of movie.

The storyline is fairly standard with the invading aliens trying to take over the minds of the humans on Earth. There is a portal that opens connecting the alien world with the skies above New York City and the Good Guys fight the Bad Guys and win in the end.

Although the storyline is somewhat typical, this really turned out to be unique and SO much fun!  Because the characters were so well portrayed by strong actors, and because these superheroes enjoyed such a well written script, I’m giving this movie two big thumbs up.

I believe the highlights of the movie were Robert Downey Jr. as Iron Man and Mark Ruffalo as the Incredible Hulk.

I think Robert Downey Jr. is just a brilliant actor.  He has so many awesome one liners that were cracking up the whole audience from younger to older viewers.  Yes, he had good writers, but I really believe that very few actors could pull off that character as well as Robert Downey Jr.

Robert Downey Jr. as Iron Man reminds me of Johnny Depp as Jack Sparrow.  They are both playing these tough characters that have a warm, fuzzy and very comedic side to them.  These contrasting traits make these characters so much fun to watch and both of these actors pull off their respective parts flawlessly.

Mark Ruffalo as the Incredible Hulk

Ok, Mark Ruffalo is just adorable.  His portrayal of Bruce Banner is wonderful.  Very quiet, unassuming, private, and very intellectual.  The special effects department really hit the ball out of the park with the Incredible Hulk.  The Hulk looks amazing in this movie.

I do not remember him being quite this big in the Incredible Hulk TV series I used to watch as a kid, but who cares, the enormous physical size of the Hulk is very cool and a big part of the movie.  You are also treated to watching the Hulk scale large buildings, crush invading aliens, stomp on alien ships, etc…  Lots of fun.  🙂

Scarlett Johanssen plays a spy helping the “Shield” project.  She does a great job in this role, and I could not help but think how very different this role was from her role in “We Bought a Zoo”.  Definitely the sign of a great actor to pull off such different characters.

Age Appropriateness for the Avengers

I’ve been asked by other Moms what is the youngest age that this movie would be considered appropriate.  I would say 12 years old.  Although much of the action is comprised of explosions and not very gory shoot out scenes, there is one torture scene with bad guys trying to get information out of Scarlett Johannsen in her spy role.  I would not have been comfortable with my 10 year old seeing that part.

Also, there are a few somewhat intense scenes with the head of the evil aliens that I do not think are appropriate for 10 year olds.  I think in 2 years, these scenes would be ok.  Of course, this depends on the child, but that would be my opinion.

I was in the mood to get away from my daily life for a few hours, and this movie definitely accomplished that goal.  Superhero movies can be so exciting, fantastical, and inspiring.

Mountain Man and I are looking forward to the new Spiderman and Batman movies coming out this year!

"City of the Beasts", by Isabel Allende
I Learned How to Make Body Butter Today
Hanalei Diaries: Day Two