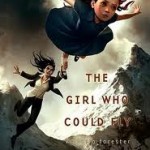 The Girl Who Could Fly by Victoria Forester

My girls are keeping track of the books they read this summer on their “Summer Reading Olympics” Log.  I thought it would be fun to interview them after they finish each book this summer.

Hopefully this will be helpful for you as you search through your bookshelves and the library for adventurous and entertaining novels to keep your little ones busy this summer.

We are going to start with “The Girl Who Could Fly, by Victoria Forester.

Imagineer finished reading this book a few weeks ago and really loved it.  I thought I would share with you some of the reasons she thought this was such an awesome book.  Imagineer is going into third grade this Fall and is eight years old.  She loves all types of books, but is particularly fond of adventure and fantasy.

My Interview with Imagineer about “The Girl Who Could Fly”

I asked Imagineer the following questions about this unique book to give you a better idea of the story:

A. The book is about a girl who can fly.  And she tries to play with other kids, but when catching a ball, she jumps up and flies to catch it.  The people are surprised. And her parents send her to this person named “Leticia Hellion”.  She owns this school where all of these other kids have special powers like her.  Then, she likes Dr. Hellion and all of the kids there and Conrad etc….  Then they find out that Dr. Hellion is actually trying to take their powers away from them.  So, they try to escape, and they can’t and are caught.  There’s this guy that has been at the school so long, he forgot what his powers are.  Piper makes him realize his power is a healing power.  Then they find that Dr. Hellion has flying powers as well.  The rest of the book is about trying to get out of the school and get back to their parents.

Q.  What did you like most about this book?

A.  I like most about how its about a girl who tries to save her friends without getting hurt.  At first, Conrad thought only the two of them could escape, but Piper finds a way to get them all out, because she cares about her friends.

Q.  What part of the book did you like least?

A.  My favorite scene is, gosh there’s so many I like, ummm, ummm is this part where Piper is trapped in this machine that Dr. Hellion put her in – this part is sad, but she has a cricket with her named Sebastian and he sings this song that makes all of them feel better.  But then, the evil Leticia comes in and takes Sebastian away.  My favorite was when Sebastian was singing and everyone was happy.  🙂

Q.  What type of book would you say this is?

A.  I’d say its an adventure book with a little fantasy.  Its also a heartwarming adventure where Piper tries to do stuff like fly up high to grab the ball.  Its a very good book.

A.  My favorite, most splendid character would be two people actually, three actually:  I really like Piper, Conrad, and Violet.  I like Piper because she is really nice and she helps all of her friends get out.  My second favorite character, Conrad, I like him, because, well, he helped make this story an adventure because Conrad made this big meeting and told everyone what to do. Without him, there would have been no escape.  My third favorite character is Violet because she was the only one that was nice to Piper for a long time.  Violet’s power is to shrink.  She wants to find tunnels that nobody ever has found.  She thinks that she can shrink far enough down to go walk through the tunnels and find things nobody every has found before.

A.  I would recommend this to everybody, not just my friends, because I think its a really heartwarming adventure, and that you all would really like it.  Its really cute and nice and sweet.  I think Victoria Forester did a very good job on this book:  creating the characters, thinking about the scenes, making up the bad people like Leticia, telling about powers, and I just think that she is a very good author and I would love to find more of her books.

Imagineer thinks you will enjoy this book too!

Imagineer thanks you for reading her review!  🙂  For another one of her reviews check out Sideways Stories from Wayside School or A Dog’s Life.

"The Witchy Worries of Abbie Adams", by Rhonda Hayter
"A Dog's Life", by Ann Martin
"Hang a Thousand Trees with Ribbons", by Ann Rinaldi

"Little Lady, Big Apple", by Hester Browne
I want a Purple Crayon like Harold's!
"When you Reach Me", by Rebecca Stead