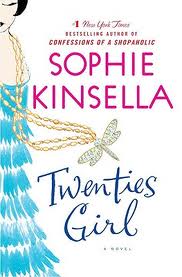 I read the Confessions of a Shopaholic series, by Sophie Kinsella a few years ago, and absolutely fell in love with Kinsella’s writing style.

The characters Kinsella conjures up are filled with wit, spunk, intelligence, warmth, creativity, silliness, and incredible imaginations.  I think this is the main reason I am so drawn to her books.

As a reader, you cannot help but be on the side of the main character.  You will be rooting for her the whole way through her awkward moments, hilarious mishaps, and hijinks.  You want her to win.

In addition to having someone to root for, which is always a great feeling, I find myself laughing out loud many times throughout her stories.

The characters she creates are so endearing and likable.  They are people that you would enjoy having as friends as they are so entertaining with the choices they make in their lives.

When I was looking for a book a few months ago, I chose The Little Lady Agency, by Hester Browne, exclusively due to the fact that Sophie Kinsella had given her two thumbs up for the story.  By the way, loved this one too.

So, I went to our local library last night to check out my next book, and decided to go for a Sophie Kinsella that I had not read yet.  I checked out Twenties Girl and Remember Me?.

I arrived home and rounded up the kids for family reading time.  As I curled up in my navy blue wingback chair and wrapped myself in my cozy sage colored reading blanket, I read the first few sentences and realized that I had read Twenties Girl last year!

I LOVED this book.  I was so sad that I had already read it.  🙁  Luckily, I have Remember Me?.  I know what you’re thinking, did you read this one already too, flighty one?  The answer is no.  I definitely have not read this one, and it looks like it will be equally enjoyable as all the rest.  Phew.

But, I thought, at the very least, I could still write a review of Twenties Girl to bring attention to this hilarious story for all of you.

Things are a bit messy for Lara at the beginning of the book, and they only get messier in a very good and completely hilarious way.

In the beginning of the story, Lara attends her great aunt Sadie’s funeral.  During the funeral, Lara is visited by Sadie’s ghost.  Sadie appears to Lara, but not to anyone else.

When Sadie finds out that only Lara can see and hear her, she will not leave Lara alone.  Sadie cannot rest until her special dragonfly necklace is returned to her.  She knows someone stole it, and she enlists Lara to help her locate it, before she can rest in peace.

And the story begins.  Even though Lara has quite a bit on her plate already, she has to help Sadie with the mysterious necklace disappearance as well, or she will never be left alone.

What Lara doesn’t realize in the beginning is how interesting the search for the necklace will become.  Lara learns a lot about Sadie and her family.  Sadie also helps Lara work through the more modern mishaps that are occurring in her life.

The relationship between Sadie and Lara is so much fun to read.  They are both strong women from different eras helping each other out by solving day to day problems and lingering mysteries.

SO, SO Fun!!  This is a must read for anyone who loves the Chick Lit genre.

I have been meaning to write my review on the Shopaholic Series as well.  Will get to that soon.  Shopaholic is where Kinsella’s masterful storytelling began, and I highly recommend checking these out as well.

Pinterest
0
« How to make a Header for your blog
Hanalei Diaries: On my way to Hanalei »

The Martian Chronicles, by Ray Bradbury
"Remember Me?", by Sophie Kinsella
Rebecca Stead's, "When you reach me"
"A Dog's Life", by Ann Martin
"The Girl Who Could Fly", By Victoria Forester
"Suzanne's Diary for Nicholas", by James Patterson

A Breezy Park Day
Did you ever Collect Something?
Hanalei Diaries: Day Two