I’m on an Alaska Airlines flight to Lihue, Kauai right now.  I am sitting next to Imagineer and Broadway in a group of three seats, while Mountain Man and Bam Bam are in the two seats to my right across the aisle.  The interior of this plane is decorated in greys, blues, and taupes.  We have already had three rounds of drinks, including orange juice, tropical mango juice, and cokes.

The group of passengers onboard seem to all be in good spirits.  Who wouldn’t be when you’re headed for Hawaii.  I mean, seriously, does it get any better?  Warm water, white sandy beaches, no alarm clocks, body surfing, real surfing, surfing lessons, and tropical hikes and waterfalls.

We are staying in Hanalei on the north shore of Kauai for the next 9 days and are really looking forward to tropical weather.  My iPhone weather app is showing 90-91 degrees for every day in this next 7 day period.  The temperatures have been dropping in the bay area, and we are all seriously missing the warm sunshine.

Imagineer and Broadway are watching the first Harry Potter movie on our iPad, and Bam Bam is watching it on Broadway’s iPod.  Thank goodness for eleven year olds.  Broadway was responsible for all of the entertainment set up for the plane ride.  This included downloading current favorite songs, downloading Harry Potter from iTunes, ensuring everyone had a notepad to draw or write on during the flight, and helping to make sure everyone was set with a book that they were excited to read.

I brought “Remember Me?”, by Sophie Kinsella, Imagineer “The London Eye Mystery”,  Broadway “The Dragon Rider”, Bam Bam “Diary of a Wimpy Kid, the Ugly Truth”, and Mountain Man the third book in the Hunger Games series, whose name escapes me right now (update: Mockingjay).  He’s currently asleep in the middle seat, with Bam Bam turning the pages rather quickly and LOUDLY in his book right next to him.  I swear Mountain Man could sleep in the middle of grand central station.

About an hour ago, we enjoyed the onboard breakfast, a “Hawaiian breakfast skillet” meal.  Really yummy.  The base was sticky rice, with creamy scrambled eggs on top mixed with portuguese sausage and topped with spring onions.  The skillet meal was lined with chunks of pineapple. 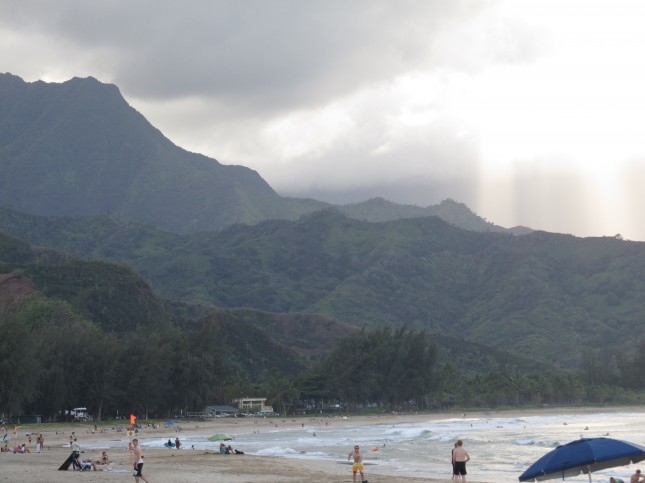 Majestic Hanalei Bay on our first day on the island.

Once we land in Lihue, we will head to Costco which is near the airport, then go to our house that we have rented through vrbo.  So excited to see it in person.  The reviews were excellent from past travelers. We are walkable to cute downtown Hanalei, a 5 minute stroll to Hanalei bay and we’re located on a cul-de sac.  The only negative review I could find was regarding some rooster noise early in the morning.  Apparently roosters are unaware of the appropriate time (according to humans) to start sqwuaking, but they seem to consistently pick 5am.

About an hour before our touchdown today, the flight attendants announced they would be delivering complimentary mai tais for their last round of drink service.  This was met with applause.

As we were getting closer to Kauai, we had a gorgeous view of the island of Oahu, then a few minutes later, Kauai.

About an hour later, he was riding the very calm waves of Hanalei Bay and grinning from ear to ear.

Beautiful view during my walk home after the beach today.  I lost my way home so walked twice as long.  Something I do not mind at all while in Hanalei. 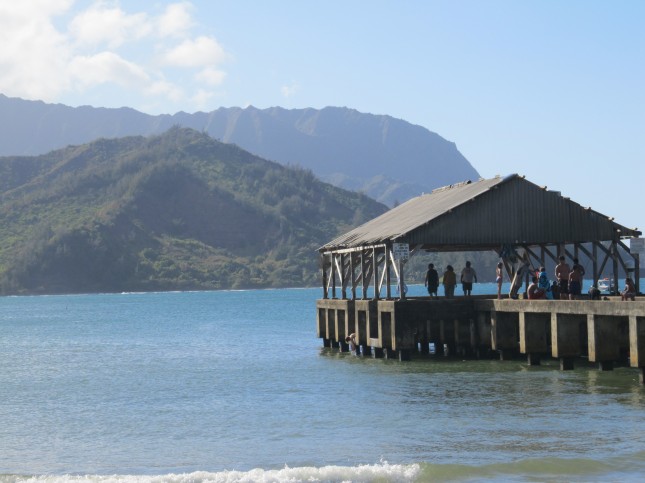 My New Blog Find: Elements of Style Blog
Top Ten Lessons in Parenting Athletes
Variety is the Spice of Life

I want to punch someone
Variety is the Spice of Life
Swim Workout - October 6, 2012