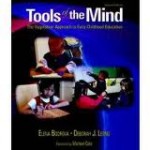 Tools of the Mind Curriculum

As I mentioned before in a previous post, the book NurtureShock, by Po Bronson and Ashley Merryman, brings up some excellent, well-researched points about how we should be raising our kids.

There is one more study I would like to discuss that is outlined towards the end of the book, called the “Tools of the Mind” curriculum designed for Kindergartners and First Graders.

Tools of the Mind Curriculum

The curriculum implements a few minor changes to the traditional ways of teaching this age briefly outlined below.

1. The wall calendar is a straight line of days along a narrow sheet of paper rather than a typical month by month set up.

2. The alphabet on the wall separates the consonants and the vowels into two different sets, rather than simply going from A to Z.  Consonants with similar sounds are clustered together (ie: C,K,Q).  Also, next to each letter is a sound map, meaning a picture of a “monkey” is next to the letter M, for example.

3. Learning through play.  The example given in the book is about playing fire station.  The kids learned all about firemen the previous week, and are now going to pretend they are firemen and write out their roles.  They get to choose between being a pump driver, 911 operator, fireman or a family that needs to be rescued.  The kids tell their teacher the role they would like and write out a play plan.  They also draw themselves in their chosen role.

The kids then proceed to play for 45 minutes in their role.  If they fuss, then the teacher asks if that was in their play plan.  They need to become self – motivated to stay in their role for so long.   At the end, the teacher plays a clean up song CD which signals that play time is over and they pick up.

4. Reading Time Structure – the children are paired up during reading time with one child holding a drawing of lips and the other a drawing of ears.  The lips drawing holder.  After the first reading, they switch roles.

5. Games – this curriculum utilizes games that require restraint, like Simon says or a game where the teacher plays music and the kids have to draw a certain shape until the music stops.

After Kindergarten, the tools curriculum continues into first grade with a make believe premise based on a book that they are currently reading in class.

Stunning Test Results of Tools of the Mind Students

The Tools techniques were developed by Drs. Elena Bodrova and Deborah Leong in the nineties.  In 1997, they decided to do a test with 10 kindergarten classes in the Denver public schools where half of the teachers would teach the normal district curriculum and the other half would implement the tools curriculum.

One third to one half of the students in these classes were Hispanic and had very limited English proficiency.  At the beginning of kindergarten, they were about a grade level behind due to this obstacle.

In spring, the kids from the tools classes “were now almost a full grade-level ahead of the national standard.”  Bronson points out that in this district, “only half the kindergartners score as proficient at their grade-level.  Of the Tools children, 97% scored as proficient.”

Why Does Tools of the Mind Work so Well

By staging a play area like the fireman example where there is a firehouse, the 911 operator, the family who is in the fire, the trucks, the firefighters etc…, and having each child commit to one role, the level of play becomes more mature, sustained and multidimensional.  Bronson says, “This notion of being able to sustain one’s interest is considered a core building block in Tools.”

Teaching children early on to remain focused and committed to the task at hand is an invaluable asset that will serve them well for the rest of their life.

Ms. Imagineer, who is in second grade, is always setting up play scenarios with her friends during playdates.

She will set up an optometrist office, a school, a restaurant, a house with a neighbor or a veterinary office to name a few.  She and her friends assign roles, and usually give Mr. Bam-Bam a small part in the play scenario too ( 🙂 ).  They can play for hours.

It really is quite amazing how engaging play can be when the area is set up efficiently to portray the playtime scene and when all characters commit to a role.

Have any of you had any experience with this curriculum in your school district?

"City of the Beasts", by Isabel Allende
NurtureShock is an Eye Opener
"Uncle Robert's Secret", by Wylly Folk St. John

The Accidental Tourist, by Anne Tyler
"Pie-Rits", by Julia Dweck
"A Dog's Life", by Ann Martin

Read Kiddo Read
43things Is Inspiring
Finally, Back in the Water