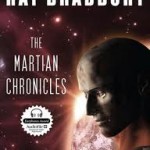 Let me just start by saying that the science fiction genre has never been at the top of my list for reading.

The Martian Chronicles, by Ray Bradbury, piqued my curiosity after reading Bradbury’s Zen in the art of writing.

I finished The Martian Chronicles this weekend, and was pleasantly surprised to find out that yes, I do like science fiction.  Well, Bradbury science fiction at least.

This book takes place between the years 1999 and 2026, when the humans or “Earth men” are trying to establish settlements on Mars.

Earth is having problems, including devastation from atomic wars.  Because of this, Earth men are looking for alternative planets to establish new colonies.

The book opens with the first explorers arriving on Mars, and details the treatment by the Martians of these “Earth men”.

Although there are references to characters from previous chapters, each chapter is a short story in itself.

The short stories build on each other to give the reader detailed accounts of the events spanning these 27 years on Mars.

With Bradbury’s detailed descriptions, I was captivated with the stories from the beginning.  The characters are so real. You really feel for these characters as they attempt to settle on a foreign planet.  It is quite a page turner, waiting to find out the fate of the humans arriving on Mars.

Its interesting to think this was written in the forties and published in 1950.  The years 1999-2026 must have seemed so far away at that point.

Bradbury and others probably thought that surely we would be have humans on Mars by the 21st century.  They also were worried about atomic war, and it makes sense that the stories discuss the atomic problems of Earth.

In Art in the Zen of Writing, Bradbury discusses how he lets his characters tell the story.  He does not sit down with an outline and a precise direction before writing.

He talks about how he is always excited writing his short stories, because he has no idea what is going to happen next, since he is merely following the character’s lead.

This manner of writing is evident in this classic.  I just loved it.  So unique and so engaging.

"The Penderwicks", by Jeanne Birdsall
"Crazy for the Storm", by Norman Ollestad
SuperFudge, by Judy Blume