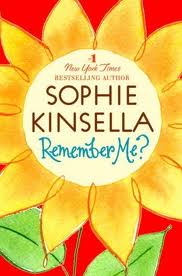 I just finished “Remember Me?”, by Sophie Kinsella this afternoon.  Well, what can I say?  Kinsella does it again.

She creates a likable main character that you cannot help but be endeared to immediately.  You want to root for her as she moves through the many obstacles in her life, and you really do not like it when someone mistreats her.

You are on her side.

Kinsella does this with all of her main characters, which for me, makes her books so darn fun.

Remember Me? is about a 25 year old woman named Lexi Smart.  She is living in London, has a great group of friends, her own flat, an ok job, and a not so ok boyfriend.

She finds out that she was in a car crash and endured a severe blow to her head.  The space in her brain responsible for memory upkeep has gone haywire, and she cannot for the life of her remember anything from  the last three years of her life.

What is very peculiar though, is that she has a Louis Vitton purse, a huge diamond ring, and a business card indicating she is the Director of the company where she used to be at a much lower level.  She also finds out she is married to a multi-millionaire, Eric, and that they live in a penthouse loft in a swanky part of town.

What the heck has happened in her life during these past three years to get her to where she is now?

The process Lexi goes through in piecing back these three years in her memory is the story.  And it is a hilarious one at that.  I was gripped from the beginning, and could not put this one down until I found out how Lexi would rebuild her memory and her life.

I just loved the story.  Its such an interesting premise to think about losing your memory for a certain period of time.  Who do you trust?  Amnesia is a tricky one.  Luckily, Lexi has some good people in her life to pull her through.

I really can’t say anymore.  Read it!  You’ll love it.

NurtureShock is an Eye Opener
"An Offer You Can't Refuse", by Jill Mansell
"Writing Down the Bones", by Natalie Goldberg