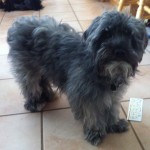 Broadway was terrified of dogs from the age of 3-8.  She wasn’t just scared of large dogs, but small dogs and medium sized dogs too.  Basically, whenever she saw an animal that barked and had a tail, she ran the other way.  I know this sounds extreme, but it was true.

When we would go to a new house to visit friends, I would have to go to the front door while my daughter watched me ask them if they had a dog in the house.  For our friends that Broadway already knew had a dog, I had to request that he/she be put in their kennel while we visited.  NOT FUN!!

I felt like we were the only parents going through this, so it was difficult to find anyone who understood.  I even hired a dog whisperer to come over to our house to try to shake this fear out of her with his gentle bernese mountain dog.  DIDN’T WORK.

We did make progress in those two hours though – Broadway was able to pet the top of the dog’s head.  Keep in mind, this was the calmest dog you have ever met and she was basically just laying on the ground and did not move as Ms. Broadway petted her.  Nevertheless, progress was made.

An End to the Fear was Near

Finally, at the age of 8, Broadway came to her senses and realized she would have to kick this fear to the curb because it was becoming quite disruptive to her life.

She started to do some major research of dogs in that big encyclopedia of dogs book that you have probably seen around.  She decided that it would have to be a calm dog that was not territorial.  She was addicted to the encyclopedia and one day made a ballot for the whole family to write down our top five dogs.

She had been talking about several breeds, so we were familiar with what she was considering. Also, Mountain Man and I had finally come to terms with the fact that we had agreed to bring another living thing into our home.  We knew, in our heart of hearts, that this was truly the only way to get Ms. Broadway past this irrational fear.  So, we were ready to start listing our top breeds.

I knew I wanted the dog to be on the smaller side and I knew that I did not want a dog that shed its fur constantly.  At the time, I had an 8,6, and 2 year old, and was just not up to vacuuming every day, so I requested that Ms. Broadway look into the breeds with hair that do not shed.

The Havanese kept coming up at the top of our list, and after a few weeks of deliberation, we decided that this was the breed for us.

We researched local breeders and found a great one.  We saw a picture of Dusty on their website and instantly fell in love.  When we went to visit him, the kids were instantly comfortable with him and connected immediately.  Even Ms. Broadway, who at first was reluctant, still fighting her fear, was able to have him in her lap after about 5 minutes.

After bringing Dusty home, it took about 3 days for Broadway to have zero fear around dogs.  It really was quite amazing to witness the quick turnaround.  I was expecting this to help, but not to completely eradicate the fear so swiftly.

I believe that once Broadway could see what it was like to have a dog of her own who she loved so much, she could better understand other dog owners and their dogs.  She understood almost immediately that special bond and the fact that these furry creatures become one of your family members.  🙂

So, if you have the same problem we did, I highly recommend thinking about finding a dog that would fit in well with your family. You might just get the quick result we did!

Wordless Wednesday: I Need to Learn how to Draw
Testing the Waters of Aperture Mode
Slow Down and Blog