My nine year old daughter, Imagineer, has read SuperFudge, by Judy Blume, at least three times in the past six months.  We’re at the point now where she is always reading a new book while at the same time, we still see the bookmark moving in her SuperFudge book on the side table near her bed.

I’ll find her at the kitchen table eating breakfast while reading SuperFudge.  She will also walk around the house carrying and reading her book. When we get in the car, she will bring her book to read as we’re driving.  She loves how funny the interactions between Peter and Fudge are, and I think she can relate, since she has a high energy little brother as well.  🙂

Needless to say, this has to be one of her favorites, due to the repeat reads.  Its actually my hardbound copy from when I was in elementary school.  My third grade handwriting is on the front where I wrote my name. 🙂

I sat down with Imagineer to hear her thoughts about this very special book today.

A.  This book is about a boy named Peter and his little brother, Fudge, or Farley Drexel Hatcher.  And they move to Princeton for a year and his sister Tootsie is born and a lot of things change.  Like Peter goes to a new school and Fudge goes to Kindergarten.

A.  The main character is Peter Hatcher.  He is a I think a 10-11 year old who is in sixth grade and has a little brother, Fudge.  Peter has a pet dog named Turtle.  Peter is nice and he has friends named Jimmy Fargo and Alex Santo.

A.  My favorite scene in the book is when Fudge, Peter, and Alex eat worm cookies.  They are chocolate chip cookies that instead of flour, they have worms in them.  Fudge is about to eat it, then decides he does not want to eat a worm cookie, but then he does.  The cookies are made by Ms. Muldour.

Imagineer LOVES this book, and this just warms my heart, since I used to LOVE this book as well.  She told me after the interview that I can interview her again soon after she reads it again.

For more book reviews by Imagineer, check out:  Smells Like Dog and Bandit.

Imagineer thanks you for reading her review and hopes that you enjoy this story as much as she does! 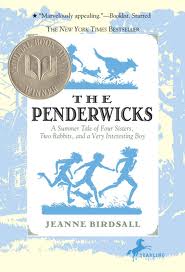 There are three novels in The Penderwicks series that have all been on the New York Times Bestselling List.  The Penderwick novels have also won the National Book Award for Children’s Literature.

From Jeanne Birdsall’s site, I found this quote about The Penderwicks:  “Meet the Penderwicks, a family who believes in truth and honor, yet can’t seem to stay out of trouble. There’s oldest sister Rosalind, responsible for the rest; stubborn, feisty Skye; dreamy Jane; and shy little Batty, whose best friend is Hound, a large dog more loyal than obedient.”

I sat down with Broadway to hear her thoughts on this book, in her own words.

A.  This book is not like normal books.  Not in a bad way, but in a good way.  This book is about four sisters who go on a summer vacation and get into some trouble.  Trouble with a bull ranging to just plain old trouble.  This is a wonderful and well described story.

A. One of the characters is Rose.  She is 12 years old and is the oldest sister of the four Penderwicks.  During the vacation she is love sick over this teenage gardener boy at the place the Penderwicks were staying at for the summer.

A.  I liked all of the scenes.

A.  Yes, because its really fun and descriptive.  Its really neat.

Well, Broadway did not divulge much, but it sounds like an adventurous book with four kids as the main characters during their summer vacation.

Broadway flew through this book and believes that all of her friends and any other fifth grader would love this story.

For more book reviews by Broadway, check out: When you Reach Me and City of the Beasts.

Imagineer, my 9 year old daughter, and I had the pleasure of reading “Forbidden Wings”, A Mermaids Story, by M.C. Arvanitis.

This captivating story with fantastical characters is absolutely delightful, and delivers a powerful lesson for young readers.  If you are brave, persistent, and have a sense of adventure, you can make your dreams come true.  The main character, Nadeea, is brave, kind, and strong.

As a parent, I absolutely love stories that capture the imagination of young readers and teach an important life lesson.  When they see a character they admire in a book exhibiting traits such as kindness and bravery, hopefully these traits will spill over into their own lives.

I sat down with Imagineer today to hear her thoughts (in her own words) on this very captivating and inspiring story.

A. This book is about a mermaid named Nadeea who is the King and Queen’s daughter, but the King and the Queen were taken away.  Since they were taken, Nadeea is teased by the other mermaids.  When Nadeea goes to the surface, she meets fairies and she wishes for wings.

And she meets this man named Sir Cecil and she takes her fairy friends on an adventure.  When they get to Wyre Island they meet Sadie Squarette, a damselfly, who guides them. They also meet seals that can shed their skins and can look like humans at the age of 16.  There is also King Colin, Zasta, and Prince Kerr of the seals.  In their adventure, they get to the Damselfly queen and she is very ill.  Whenever she lays eggs, somebody comes and takes them before one can become the new queen.  And there are many more adventures, like when she sees her parents again, but you have to read the book to find out.

A.  The main character is Nadeea.  She is a mermaid and a princess.  Her parents were caught when she was very young.  She helps her friend Cookie and gets bullied by this mermaid girl named Damean.  Nadeea is brave, nice, helpful, a good swimmer, and adventurous.

A. My favorite scene in the book would be when Manny the sawfish saved her parents and the other Mer children and Cookie, of course.

A. I guess it would be the ending because it was when the book ended.  Actually, the ending was very nice because there was a big celebration.  But, I was sad it was ending, because the story was over.  And, I think they should also make a sequel!

A.Yes.  I would recommend this book to my friends because it is adventurous, exciting, happy.  Its very detailed and tells about what people look like and what they do and stuff.  The detail makes it exciting.

As mentioned above, we thoroughly enjoyed this story and would love to see a sequel detailing more of Nadeea’s adventures.

For another book review by Imagineer, check out:  The Secret of Platform 13

We have a review of “When you reach me” on this site already completed by my eleven year old, Broadway.

Due to Broadway’s extreme excitement about this story, Imagineer, my 9 year old daughter, wanted to read the book as soon as possible.

She just finished it today and I sat down with her for an interview.

A. The book  “When You Reach Me,” is a book about a girl named Miranda, and her friends, Sal,  Annemarie, Colin, and this Wacko Man, or Marcus. Miranda keeps getting these notes— well only 4. At the starting of the notes she didn’t know who the person was that kept writing notes. Later on, she figures out “Time travel is possible.”

A. The main character is Miranda. She lives in New York and is in 6th grade. She is short.

A. The worst scene in the book like always…..when I finished it!

A.Yes.  I would recommend this book to my friends because it is mysterious and shocking.

As I said after Broadway finished this book, I have to read this one very soon.  From both of my daughters’ excitement and wonder with this book, I’m very intrigued.

For another review by Imagineer, check out: The Secret of Platform 13. 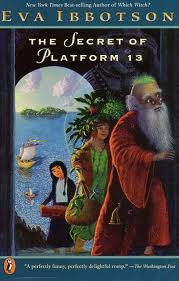 She came home from school last week and said that we just had to go to the library to check this book out immediately.  Her teacher was reading this book to her class after lunch for about 20 minutes a day.  Imagineer was having a hard time waiting to find out what was going to happen, so she wanted to start reading it at home.

Below is a short interview with Imagineer discussing this book:

A.  This book was about some people who are called the rescuers who go to rescue the prince who was stolen.  the prince was stolen 9 years ago.  They can only get through the gump to save him every 9 years for 9 days.  The gump is like a secret door that they go through to get home.  They have to take a boat to get back to the island.

A.  There isn’t really a main character.  A couple of the characters are Gurkie, Cor, Odge, Hans, and Ben.

Q. Who was your favorite character and why?

A.  I think it would be the mist maker.  Its an animal on the island that makes mist when you play music.  The mist maker was like an animal that was cute.  It kind of looked like a baby seal.

A.  My favorite scene is when they figure out that Ben is the prince and he doesn’t have to go to the military school place.

A.  The main thing that makes the worst scenes is Raymond.

Thank you Imagineer for the interview.  Sounds like an adventurous book with a well told story and engaging characters.

For another recent review by Imagineer, check out Bandit.