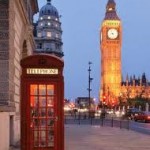 My oldest child is 10 1/2 currently, but she is already talking about what colleges she would like to attend.  This college talk made me remember my wonderful experience with working abroad after my college graduation.  The first six months after college graduation is a perfect time to fully immerse yourself in another country.

When else will you have six months to a year to travel and work without family constraints, a mortgage, etc…?

This really is the time to take advantage of traveling abroad.  I think to really understand a country’s full flavor, living there for at least a few months is the only way to fully immerse yourself.

Luckily, I did just that after college.

In my senior year, a representative from BUNAC came to my college campus, and in his thick English accent described the program.  He described an opportunity to live in London, work in London and travel to other countries when you wanted to broaden your horizons further.

I was sold from about five minutes into the presentation.  At that point, I did not know exactly what I wanted to do when I graduated, but I always had a burning desire to see other countries.  Growing up, the furthest my family traveled was to Hawaii for a vacation when I was in the eighth grade.  Hawaii was amazing, and one of most favorite places, but the lure of Europe was always intriguing to me.

My First Few Days in London

I boarded a plane in the middle of June and arrived into London in the evening and rolled my luggage all the way from Heathrow Airport to downtown London where my first hostel stay would be.  The plan was to stay in the hostel for a few nights, go to the BUNAC orientation meeting, find roommates, find a flat, and find a job.  Seems like I should say now, “but here’s what actually happened” and then go into a long diatribe about all of my mishaps and time delays etc..

Well, I’m happy to say, that my plan unfolded exactly as I had planned.  After my first night’s sleep in London, I checked in for the orientation at the BUNAC offices.  During the orientation, I met two students who wanted to look for a flat with me.  One of the student’s had just graduated from LeHigh University in Pennsylvania and the other was from Utah (I cannot remember where she graduated from).  (Side note:  these minor memory lapses, I blame on motherhood)

Anyway, after meeting Laura (LeHigh) and Lisa (Utah), we started to peruse through the job listings and found some great potential opportunities.  At that time, in the mid ’90s, BUNAC provided a job listings board which was incredibly helpful and really helped you to get off on the right foot.  I found a few good options, but wanted to focus on finding a flat first.

So, the next day, Laura, Lisa and I set off on our search for a flat, close to central London, but not too expensive.  I believe it was in the first day of looking that we found a wonderful, large flat in Willesden Green, in Northwest London, that filled our needs perfectly.  The flat was large and very clean and close to a tube stop.  I remember one of my initial shocks was that the washing machine was in the kitchen.  Now, I don’t think that is ridiculously strange, but at the time, I remember thinking it was out of this world strange.  Also, there was no dryer.  I guess that was pretty normal at the time.

The flat was large enough for four people, so we advertised for a fourth roommate and found one within a week.  Her name was Tina from Seattle.  We all got along great and went about looking for our first job. 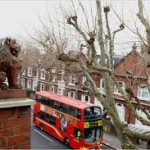 After temping for a few weeks, I found a sales associate job at the Gap in Oxford Square.  The Gap had just come to London recently and was all the rage.  The store was seriously packed ALL the time.

I really enjoyed meeting the other employees.  It was so surprising to me that they were learning about London from me, because I was the one making the effort to go on one day trips to Bath, Bristol and Cambridge to name a few.

In addition to the Gap, I also babysat for American families who were in London for jobs or schooling.  BUNAC had a connection to a babysitting service looking for American babysitters.  This was a great side job to see that side of living in London.  I have never lived in London since this experience, but I still think it would be so much fun to live somewhere for a few years that is way out of your comfort zone.  For my husband’s previous job, we almost were able to live in Singapore for a few years, but it would up not happening.  Oh well.

With my BUNAC friends, I traveled to Prague, Czech Republic for a weekend of exploring.  At the time, this was four years after they became a capitalist society.  They had never been exposed to competition before, and it was obvious.  We stayed in a very nice hotel for 3 dollars per night and had four star meals for 2 dollars.  I’m SURE things have changed now, but at the time, there were many great deals since their understanding of competition had not been refined as of yet.

Benefits of a Full Immersion Experience

My Hope for my Kids

I sincerely hope that my three kids will also have a strong desire to learn about countries outside of the U.S.  BUNAC really makes the experience doable for newly graduated students and I highly recommend it.  I looked over their website and it looks like they now have programs in Peru, Cambodia, South Africa, Australia, Canada, Ireland, New Zealand and, of course, still England.

States, Capitals and Flags, Oh My!
Giving our Kids Space to Grow
Finally, Back in the Water

Kokkari is THE spot for Exquisite Greek Food
Random Thoughts
Five Year Olds and Birthday Parties
Sounds From the Family
Seatbelt Bags - Could I finally have found the perfect handbag?
Sights and Soft Sounds of the Library

Friends with Kids is a Ridiculously Funny Movie
Finally, Back in the Water
Random Photos