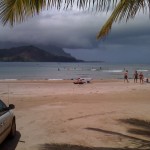 What is the most surprising vacation you have ever taken?

The answer to this question is an absolute no brainer for me and my family.

The most surprising vacation I have ever taken was to one of my most favorite spots on earth – Kauai, Hawaii in 2008.

Actually, this is one of the better ages to travel with kids, because they are not running around yet.  Bam-Bam was still just eating and sleeping at this point.  We brought a tent for him to sleep on the beach and it worked out great.

The Vacation Plan and how it Changed

So, we planned our vacation to be 7 nights, leaving on a Thursday and returning the following Thursday.  We chose a condo in the Poipu Kai resort on the South Shore and were all set.  We were traveling with two other families with similar age kids and we all had our own condos in the Resort.

Kauai is one of my most favorite places in the world, so I was thoroughly enjoying our tropical vacation and did not want to leave.

Little did I know, that I would get my wish…..

On Monday, the fourth day of our vacation, Aloha Airlines went out of business.  Now, we did not fly out on Aloha, we actually flew out on ATA, so it was not going to affect us.

However, we could definitely see that there was quite the fervor on the island of people not knowing how to get home. Flights were being snatched up quickly with thousands left stranded on the islands with the collapse of Aloha.

So, Thursday arrived way to quickly, and we were out to dinner at a restaurant on Brennecke’s Beach, when we joked that we should volunteer to give up our seats, since we knew there were long waiting lists for flights.  We were only half serious.  Our friends were staying for two more days and started convincing us this might be a good idea.

Then later on in the dinner, as Mountain Man and I were looking out at the sunset and feeling really, really sad that we hadn’t booked 10 days instead of 7, we discussed what would be involved if we gave up our seats.  It would only mean getting back on Saturday or Sunday instead of Friday morning, so we decided, let’s go for it.

We Arrive at Lihue Airport

Our flight was scheduled to leave at 10pm, so we arrived around 8pm (it was the red eye flight – much cheaper rates).

As we were waiting in our chairs secretly hoping against hope that there would indeed be a request for volunteers to give up their seats, sure enough, about 30 minutes before boarding time, the request was announced.

If we gave up our seats, we would be treated to two nights at the Kauai Marriott with all food expenses covered, and we would be booked on a flight to leave on Saturday.  We jumped at it.

We waited about an hour for an ATA shuttle van to whisk us away to the beautiful Kauai Marriott, and phoned our friends that our plan had worked.  We invited them to come check out the gorgeous Marriott pool the next day.  We were so excited.

The Next Morning at the Marriott

After enjoying a morning shower in our beautiful fully paid for room, I came out of the bathroom, and Mountain Man told me that he had news and I should probably sit down.

All sorts of things ran through my mind.

He then proceeded to tell me that the most unbelievable thing happened last night with the airlines.  Our carrier, ATA, went out of business TWO hours after our scheduled flight!!

The employees at the airport the night before had NO idea that their own airline would join Aloha in the same week and go out of business!

So, needless to say, our fun Friday we had planned, quickly took a different turn.

We found out from the front desk that our room was going to be comped by the Marriott, but that was it – no free second night and no free food as promised by ATA.  ATA was simply non-existent.  It collapsed over night.

And the Search for a Flight Home Begins

The two families we were traveling with came up to the Marriott and the Dads starting calling every airline imaginable, and were on hold for hours upon hours that day.

There were simply no flights available to get off the islands.  Mountain Man was even asking for any Western city.   We wanted to fly into Oakland, but we started looking at Arizona, Oregon, Washington – anything.  But, nothing was available.

One of our friend’s finally booked a flight, and it was going to cost the same amount they had booked the tickets for months ago.  Then, our other friend found tickets for the following Tuesday for 2,000 (much more expensive than the original cost).

We, however, still did not have anything.  Oh, let me correct myself – Mountain Man placed a hold on tickets for $4,000 which was more than our entire week long vacation!  Crazy stuff.

Luckily, he did not purchase the tickets, because the next morning, one of our friends called and told us about a deal with Hawaiian Airlines, where they were selling $400 seats on two flights the following week.  Mountain Man quickly got on the horn and found out the Monday flight was sold out, but there was still space for us on the Wednesday flight.  Yippee!!

Where Do we stay for our unexpected extra 4 nights? 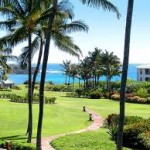 We decided to head back down to Poipu Kai and rented a different condo for the 4 nights remaining of our vacation.

One of our friends was leaving Monday night, the other Tuesday morning, and we were leaving Wednesday morning. So, we were supposed to be the first family to leave, but wound up being the last.

I think the vacation Gods were telling us that we needed a longer break from our busy lives.

We managed to enjoy these extra nights.  Do not get me wrong – I would LOVE to stay in Hawaii for months, but when its not planned, and there is a hefty unexpected price tag, it takes the wind out of your sails a bit.

On our last day in Kauai

During our two week stay, we had grown very fond of the North Shore of Kauai, and Hanalei Bay in particular.  So, for our last day, Mountain Man and I, and the kids drove up to the north side one last time.  It was raining and stormy, but the endless waterfalls looked amazing.

Mountain Man took one last ride on his surfboard in the storm and jumped off the Hanalei pier.

We drove past the Hanalei Elementary School and saw the principal walking with a class of students.

We sat there dreaming about what it would be like to live on the island.  It was a nice dream.

There is something so magical about Hanalei, its difficult to put into words.

The North shore of Kauai is, in my opinion, a more authentic Hawaii than the south shore, and does not feel touristy at all.  Just love it. 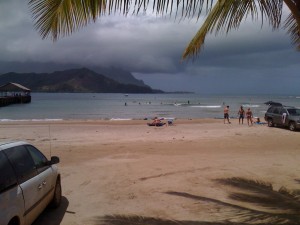 When I went to the grocery store, I pretended in my imagination that I was picking up the weekly groceries to take back to my gorgeous home on Hanalei Bay.

I might have contracted a bit of Pineapple Fever. 🙂

We Flew Back to Oakland

Even after two weeks, it was really difficult to leave.  I believe that Hawaii is one of the few places where you can have a real vacation.  By real vacation, I mean relaxation amongst incredible natural beauty with a feeling of truly being away from it all.  Just love it.

Finally, Back in the Water
States, Capitals and Flags, Oh My!
Magnificent Redwood Trees
Its Ok to Have Snowflakes in your Living Room
I want to punch someone
Today's Morning Swim Workout

Today's Smile
Beautiful Art at Etsy
Sitting at my Desk